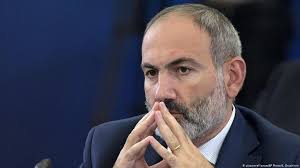 Armenian Prime Minister Nikol Pashinyan and his family have tested positive for the coronavirus, he said Monday, as the rate of new infections soared in the Caucasus nation.

“My coronavirus test was positive yesterday,” Pashinyan said in a self-recorded video message on Facebook, adding that his family were also infected.

He said he had no “visble symptoms” of the virus and would be working from home.

The prime minister and his wife Anna Hakobyan, who is a journalist, have four children.

The ex-Soviet republic of some three million has so far reported 9,492 cases of the coronavirus and 139 deaths.
Coronavirus patients have overwhelmed Armenia’s hospitals and last week health officials said that intensive care treatment could be soon restricted to patients with the best chance of survival.

Pashinyan’s announcement came nearly one month after Armenia on May 4 lifted a state of emergency imposed in March to slow the spread of the coronavirus.

The prime minister acknowledged his government had failed to enforce anti-virus measures and there had been widespread quarantine violations.

Pashinyan was elected prime minister in the wake of mass popular protests he led two years ago against veteran leader Serzh Sarkisian and his Republican Party.

He has since led a relentless crusade against graft and initiated sweeping judicial reforms.