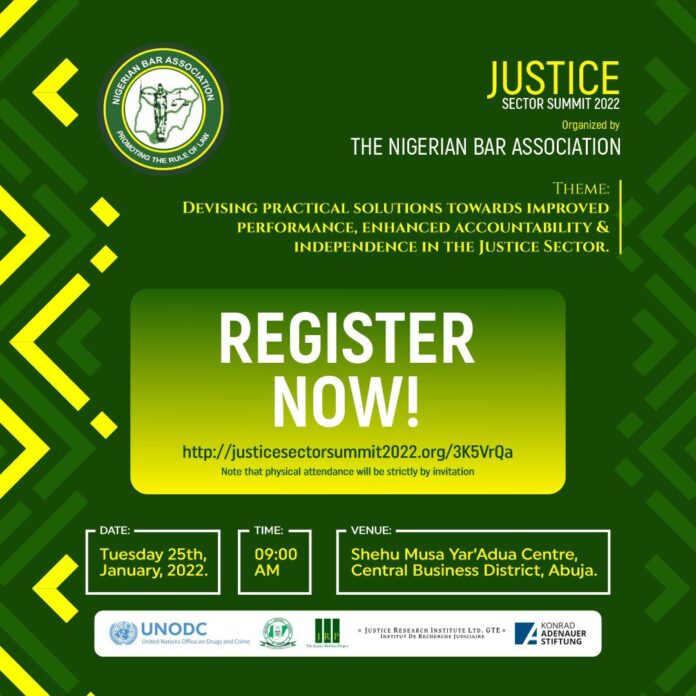 For instance, the Nigerian Bar Association (NBA), in a Bill it presented to the Constitution Review Committees of both the Senate and the House of Representatives as part of the ongoing Constitution Review process, has made elaborate proposals for reform of the judicature provisions in the 1999 Constitution. The Bill focuses, among other issues, on the related problems of proper budgeting and funding for the judiciary and the need to separate the administration of the courts from the administration of justice.

The NBA has also, in collaboration with the Justice Reform Project (JRP), put machinery in place to establish a Court Monitoring Scheme designed to generate actionable data and statistics that would assist in identifying the primary causes of the delays in justice delivery.

On its part, the National Judicial Council (NJC), through the National Judicial Policy it developed in 2017, identified a number of reasons for the public’s increasing lack of confidence in the judiciary. These include lack of efficiency of the judicial appointments process, lack of transparency and accountability in the judicial process and the administration of justice, the courts’ lack of capacity to promote and protect the rule of law, delay in justice delivery, the inadequacy of resources needed for the judiciary to provide efficient administration of justice, among others.

In August 2020, the Justice Research Institute held its first Law and Policy Webinar Series which examined the underlying weaknesses in judges’ selection and appointment processes in Nigeria and proffered recommendations for the creation of an ideal system that would attract and admit only the the best candidates to the bench. It was themed “Selection and Appointment of Judges: Lessons for Nigeria”.

These efforts notwithstanding, the Nigerian justice sector continues to lag behind. Available statistics show that Nigeria ranks 121 out of 139 countries on the Rule of Law Index of the World Justice Project (WJP), 2021. The index also scored Nigeria’s criminal justice system 0.40 on a scale of 0-1 and ranked the judiciary 121 out of 139 judiciaries in terms of absence of corruption. The WJP scores nations on eight key indicators including the state of the Criminal and Civil Justice System; where it measures, among others, whether criminal, civil and other judicial officers are competent and produce speedy decisions. It also measures the accessibility, impartiality and effectiveness of the judiciary and other alternative dispute resolution mechanisms.

From the foregoing, there is no doubt a consensus among justice sector stakeholders that Nigeria urgently needs an effective, fair, humane, accessible and accountable justice sector, which is considered indispensable for upholding the rule of law as a critical building block for the socio-economic and political development of the country.

This is why the NBA, the Justice Research Institute, the Konrad Adenauer Foundation, the United Nations Office on Drugs and Crime (UNODC) and the Justice Reform Project have come together to organise the Justice Sector Summit 2022 aimed towards achieving a justice sector in Nigeria that enjoys the trust and confidence of citizens and businesses. Before now, these stakeholders were all planning various initiatives aimed at addressing perceived challenges in the Nigerian justice sector. The summit is, therefore, an effort to harmonise these various initiatives.
The summit, themed “Devising Practical Solutions Towards Improved Performance, Enhanced Accountability and Independence in the Justice Sector”, is scheduled to hold in Abuja on Tuesday, January 25, 2022. It will take a hybrid format, with participants attending both physically and virtually. The summit will specifically address challenges around (a) Establishment of a solely merit-based judicial selection, appointment and promotion system; (b) Securing a different approach to budgeting and funding for the Judiciary; (c) Identifying the primary causes of delays in justice delivery in Nigeria and devising and implementing workable solutions to address this problem; and (d) Implementing a comprehensive court monitoring scheme.

According to a programme schedule released by the NBA, there will be three technical sessions on the topics “Judicial Appointments/Selection: Current Practices & Challenges”, “Rethinking Judicial Administration: Budgeting; Funding; and Accountability”, and “Accelerating the Speed of Justice Delivery: Accountability & Performance”.

The Attorney General of the Federation, the Chief Justice, the Senate President and the NBA President, Olumide Akpata, will hold a session on “Devising Practical Solutions Towards Improved Performance, Enhanced Accountability and Independence in the Justice Sector”, to be moderated by Dr. Olisa Agbakoba (SAN), a former president of the NBA.

Register in advance for this webinar: