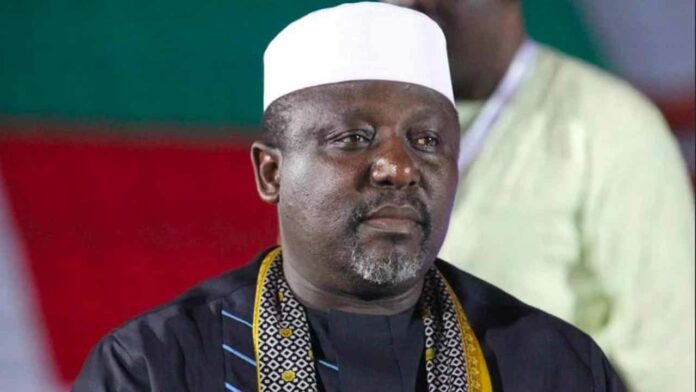 The absence of Justice Ahmed Mohammed of the Federal High Court, Abuja, on Wednesday stalled the suit filed by former Imo Governor, Rochas Okorocha, against the state government and others.

Justice Mohammed had, on September 22, fixed the 17th of November for a hearing of an application, challenging its jurisdiction in the suit filed by Okorocha.

In the last adjourned date, the former governor’s counsel, Oba Maduabuchi, SAN, had urged the court to fix another date to take the motion, challenging its jurisdiction, and moved for an adjournment on the ground that he was bereaved.

The prayer for adjournment wasn’t opposed by counsel to defendants in the suit, including the Economic and Financial Crimes Commission (EFCC).

Although the suit marked: FHC/ABJ/CS/508/20 was number 14 on Wednesday’s case list, the case could not proceed due to the judge’s absence, NAN reports.

Recall that Okorocha, who currently represents Imo West Senatorial District, in a suit filed on May 28, 2020, had urged the court to restrain the EFCC and others from probing him.

While the EFCC is the 1st respondent, the 2nd to 48th respondents are the Attorney General (AG) of Imo State and members of the seven panels set up to probe previous administrations in the state.

Recall that Okorocha had, on June 29, urged the court to make an order setting aside the seizure and sealing of some of his property by the state government.

Okorocha also asked the court to restrain the defendants from investigating him or implementing the recommendations of the seven panels set up to probe him while he served as the state governor between June 2006 and May 2019, pending the hearing and determination of the substantive suit.

Meanwhile, Eze Duri-Ihuoma, SAN, who is the 44th defendant and appearing for himself in the matter, told NAN shortly after the case was adjourned on Sept. 22 that the suit filed by Okorocha did not disclose any reasonable cause of action, hence, the court lacked jurisdiction to hear it.

According to Duri-Ihuoma, the subject matter jurisdiction is not there in the suit and that the application is alien to the law.

He said, “The applicant is claiming that because the EFCC is investigating him, the state government should fold his hands and not probe him.

“That is alien. Some of us had also argued that the former governor was simply saying, ‘extend my immunity.’

“But his immunity ended when he left office and he wants that immunity extended.”

The lawyer said he was hopeful that the suit would be dismissed because it lacked merit.

However, as of the time of filing the report, the court was yet to fix another date for the matter.