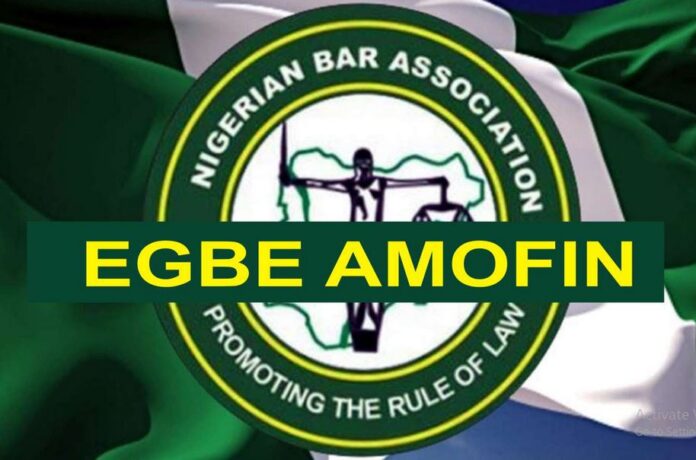 A pan-Yoruba lawyers association, Egbe Amofin, has rejected the online polls of the Nigerian Bar Association (NBA) that produced Olumide Akpata as the President-elect of the Association.

Egbe Amofin had prior to the election adopted Dele Adesina as its presidential candidate for the election.

However, in a statement made available to TheNigeriaLawyer (TNL) signed by its Chairman and Secretary, Chief Adeniyi Akintola (SAN) and Oluwole Akintayo, Esq respectively, Egbe Amofin said the election was conducted in breach of the constitution of NBA.

The reasons advanced by Egbe Amofin include disenfranchisement of significant number of NBA members, unlawful inflation of number of voters of some Branches, voting by some lawyers in the Diaspora, etc

Read the full statement below:

1.That the Nigerian Bar Association is required by its Constitution to play a pivotal role in the defence of democracy and rule of law in Nigeria;

2. That the Nigerian Bar Association cannot effectively defend democracy and rule of law without ensuring that the democratic process of electing its officers is credible and transparent;

3. That the electronic elections conducted by the Nigerian Bar Association in 2016 and 2018 were marred by alleged electoral malfeasance which led to to litigation by aggrieved members;

4. The Egbe Amofin and other stakeholders have repeatedly called on the ECNBA to ensure that the 2020 NBA election was devoid of any form of manipulation as the NBA owes its members the responsibility to deliver free, fair, credible and transparent elections;

5. The ECNBA turned deaf ears to such plea and decided to conduct the 2020 NBA election of the National Officers in defiance of the Electoral Guidelines and the Constitution of the NBA and has thereby exposed the body to undeserved embarrassment;

NOW THEREFORE the Egbe Amofin has resolved as follows:

1. That the 2020 Election of National Officers was conducted in breach of the provisions of the NBA Constitution in many material respects including but not limited to the following:

(a) Creation of a Diaspora branch of the NBA for voting contrary to the stipulation of the Constitution;

(b). Failure to make available the Final Voters’ List 28 days before the election as prescribed by the Constitution;

(c) Large scale disenfranchisement of a significant number of lawyers who underwent the verification process;

(d) Removal from the Final Voters’ List the names of voters without lawful justification leading to their disenfranchisement;

(e) The unlawful inflation of the number of voters assigned to some Branches;

(f) The unlawful declaration of an inconclusive election as final results notwithstanding the fact that the number of verified voters who were unlawfully disenfranchised was significant to affect the final outcome of the election.

3. That the Egbe Amofin condemns in unmistaken terms the blatant breach of the NBA Constitution and the electoral process in violation of its provisions.

4. That the Egbe Amofin will not recognise the results of the election process conducted in breach of the NBA Constitution. Hence, the Egbe Amofin rejects the purported results declared by the Election Committee of the Nigerian Bar Association (ECNBA).

5. That the Egbe Amofin calls for a cancellation of the election conducted by the ECNBA in July 2020 against the background of e-fraud which has become a regular feature of NBA elections, a development that has led to the initiation of criminal prosecution in respect of the 2018 NBA Election.

6.The Egbe Amofin calls on the Body of Benchers to appoint a Caretaker Committee to manage the affairs of the NBA for 6 months and conduct a credible election for the Association.

7.That the Egbe Amofin directs that appropriate actions be taken to protect the Constitution of the Nigerian Bar Association and to stop the inauguration of National Officers purportedly elected in breach of the said Constitution.

8. The circumstances surrounding the conduct of 2020 NBA Election of National Officers be thoroughly investigated and so that the perpetrators of the e-fraud are identified and recommended for prosecution under the Cybercrimes Act.

9. That the Egbe Amofin calls for electoral reform and will not take part in any other election organised by the NBA until this reform is undertaken.

10. If the NBA does not embark on urgent electoral reforms to restore the integrity of the Association the Egbe Amofin will not hesitate to consider other options in exercise of the fundamental right of members to freedom of association.