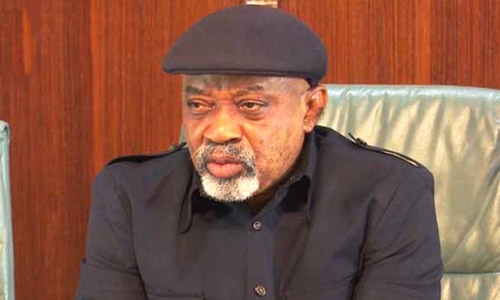 Nigeria’s Minister of Labour and Employment, Chris Ngige, has said that child labour has become a scourge in Nigeria as no fewer than 15 million children across the country have been turned to labourers under the current President Muhammadu Buhari-led government.

Ngige, who confirmed that statistics by the International Labour Organization (ILO) revealed that in 2020, there were about 15 million child workers in Nigeria warned that if there are no mitigating strategies, it could increase by the end of this year.

The Labour Minister said this on Tuesday at the National Children Conference commemorating the 2022 World Day Against Child Labour (WDACL), with the theme “Universal Social Protection to end Child Labour.”
Peoples Gazette quoted Ngige as saying that “In Nigeria, child labour has become a scourge. Several children find themselves on the streets, forced to make a living, with others employed in industrial complexes and hazardous environments.
“Statistics revealed there are about 15 million child workers as of 2020, according to the ILO, with the UN warning that the absence of mitigating strategies could see an increase of children engaged in child labour by the end of 2022.
“Sub-Saharan Africa has seen 19.6 per cent of all African children in child labour and a possible nine per cent in hazardous work. This is in contrast to continued progress being made elsewhere in the world.”
According to the minister, the labour ministry spearheaded the implementation and enforcement of the National Action Plan on Child Labour, Prohibition and Elimination of Forced Labour, Modern Slavery, and Human Trafficking in workplaces.
“The outbreak of COVID-19 brought with it a chain reaction that caused devastating effects on the long-term development and safety of children worldwide. As a result, families were plunged into poverty and vulnerable conditions, among others.
“Also, the households needed to employ various means for survival; this meant that children were forced to go into the streets to bring income, exposing them to higher levels of vulnerability compared to adults.”
He therefore noted that the current government and the International Labour Organisation are calling for more collaboration and partnerships to tackle the issue of the 15million child labour in the country.